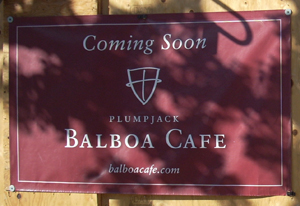 Today’s past project brings us back to September 2008 just before the opening of the Balboa Cafe in Mill Valley. The Balboa Cafe Mill Valley continued the Balboa tradition as the “in” place to eat, drink, and make merry. That reference is to the original Balboa Cafe located at Fillmore and Greenwich in San Francisco, one of the city’s oldest saloons, established in 1913.

Located on the ground floor of a two-story building with existing tenants, construction began with gutting the first floor and removing the joist flooring. LeDuc & Dexter installed the sanitary sewer and grease waste line along with three-inch PCV beverage lines that house and conceal beverage supply lines to the kitchen and bar areas. A concrete slab floor was poured over the under slab plumbing.

LeDuc & Dexter installed gas lines and connected them to the commercial grade stoves, ovens, griddles, deep fat fryers, toaster ovens, and an outdoor fire pit for the patio. They also installed eight sinks and six floor drains for the kitchen and three compartment sinks, pan drains, and water lines for the coffee makers in the bar areas.

JMA Superintendent Gene Chapanar was so impressed with the performance by LeDuc & Dexter plumbers Skip Caster and Gonzalo Ochoa that he said he would ask for them personally the next time he works with LeDuc & Dexter.