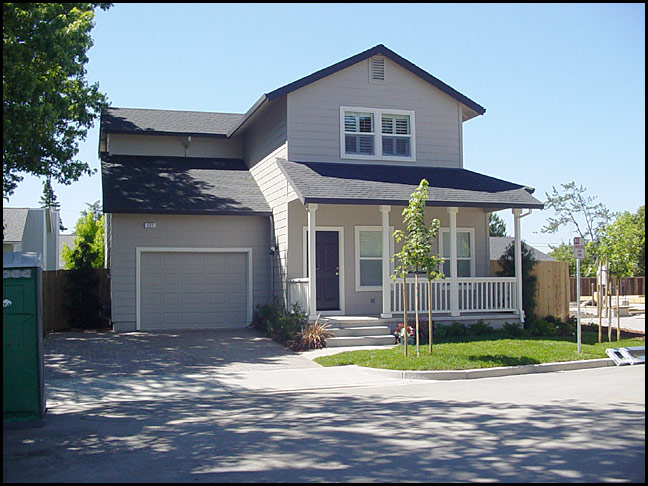 LeDuc & Dexter participated in Sonoma County Habitat for Humanity’s Builder’s Blitz in the summer of 2006. In a five day period from June 5th-9th, Christopherson Homes along with subcontractors and suppliers built a Habitat for Humanity home from the ground up. This event was nationwide with 1,000 home builders building 500 homes in 160 communities.

The new home was for a couple and their child that qualified for the Habitat for Humanity home by working 500 hours of “sweat equity” and demonstrating that they are capable of paying the mortgage for the home – this is not a home giveaway program.

Christopherson Homes designated one of its best construction superintendents, John “Big Dog” Matthews, as the project leader, responsible for building the house in an unprecedented five days. “The biggest challenge in doing this whole this is putting this program together,” said Matthews.

One challenge, Matthews said, was convincing subcontractors to do the work following another high profile homebuilding event a few years ago. He said many subcontractors involved in the home built for a Penngrove family for the ABC television show Extreme Home Makeover were turned off to such projects due to the minimal recognition that was given to their companies. “My challenge was to get that bad taste out of everybody’s mouth and say ‘Hey, this is not for publicity, this is for Habitat for Humanity, and for the community,'” said Matthews.

Christine Dahl Silva, Sonoma County Habitat for Humanity Project Coordinator, said she’s especially thankful for the professional trades that donate their time, “Most of our volunteers are unskilled so we really need expertise for plumbing and the other trades.”