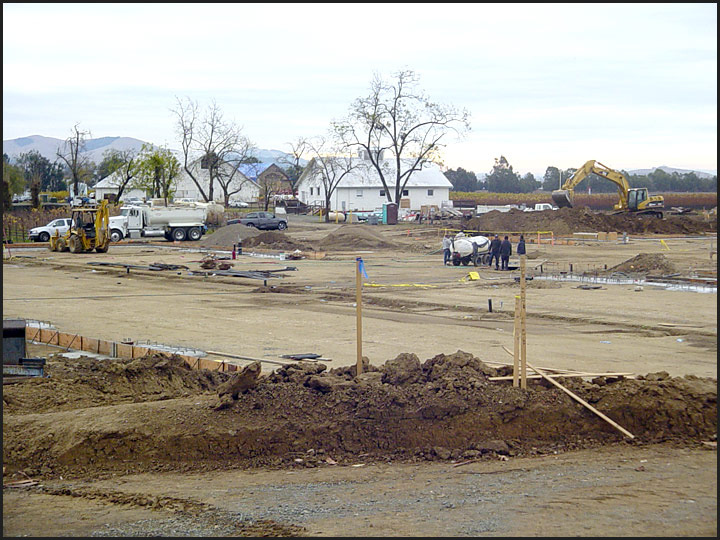 Merryvale Vineyards, of St. Helens, had broken ground on their new winemaking facility in the Carneros region of Napa County. The general contractor for the winery, which was scheduled for completion by the 2006 crush season, was Andrews & Thornley, Inc. of Napa. LeDuc & Dexter had worked with Andrews & Thornley many times over the past years including Infineon Raceway, River Terrace Inn, and Stryker Sonoma, a premium winery located in Geyserville.

LeDuc & Dexter described the Merryvale Vineyards’ new facility as “a big winery”. The trend of winery construction in the industry and for LeDuc & Dexter had been towards smaller family wineries such as Mauritson Family Winery and Moshin Family Winery.

At the time, LeDuc & Dexter were just getting started on the underground plumbing. The cement slab was so large that it had to be poured in sections and construction began as each new section was poured. It was definitely a fast track schedule but worked by Andrews & Thornley was well orchestrated. Later, the catwalks would be installed before the tanks. Typically the catwalks and tanks would have been installed together, but since there was so much overhead plumbing to be done, the catwalks were attached to the building early to allow work on the overhead plumbing to begin.

The drainage system for the new winery was also quite large. Oversized trench drains will be connected with more and wider catch basins as requested by the winemaker. Aside from the large fermentation room, the winery will also feature a large barrel storage room, mechanical room, and administration area.

The winery was also in line to have a very elaborate laboratory set-up. The lab would be larger than most and will have numerous jet stations with de-ionized water, natural gas, nitrogen, compressed air, and a vacuum system. Overall this was a challenging project for LeDuc & Dexter due to its size and schedule. But those are just the kind of jobs LeDuc & Dexter like to be a part of.