The Congregation Shomrei Torah’s new temple was under construction back in August 2006, on Bennett Valley Road across from Waterfall Towers in Santa Rosa. After months of delays due to heavy spring rains, the hilltop temple has all of the retaining walls that line the driveway in place and the temple walls and roof are being completed. 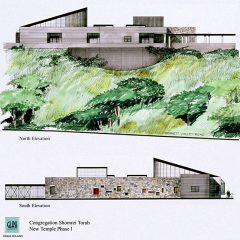 With a 360 degree view of Santa Rosa from the temple’s hilltop location, it’s somewhat surprising how tranquil the setting is with mostly the trees of Santa Rosa visible to the viewer’s eyes. A few landmarks stand above the tree line such as the small cluster of taller downtown Santa Rosa buildings, but other than that and the adjacent Sonoma County Fairgrounds the view is mostly of trees and surrounding hills and mountains.

LeDuc & Dexter Inc. has completed the under slab plumbing for the commercial kitchen and restrooms including the domestic water system and sanitary system. LeDuc & Dexter will also be completing the roof drainage system. This is phase one of the temple, which features a circular wall and a clear story above it along with a 4 & 12 pitch roof.

Oliver & Company, Inc. was the general contractor for the project. Oliver & Company was founded by Lloyd H. Oliver and Charles E. Coburn in 1946 nine years after Mr. Oliver had helped complete construction of the Golden Gate Bridge. Since then Oliver & Company has completed over 1,000 buildings in Northern California. Some notable projects include the San Francisco Film Institute, Spinnakers Restaurant in Sausalito, and the Pyramid Ale Brewery in Berkeley.