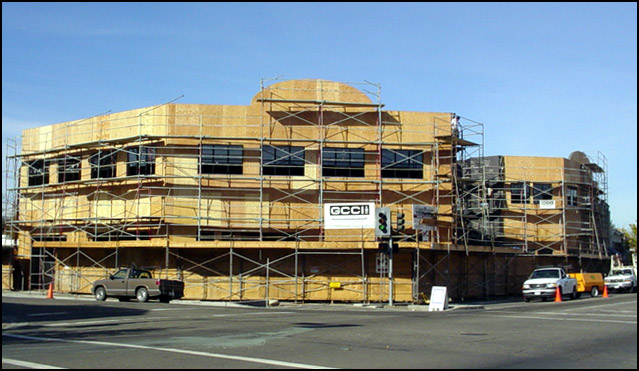 “Zero clearance is what we have. When you build in a downtown area it’s a real challenge,” says Mike Gentry of GCCI. “We have no staging area, so we schedule the delivery of materials as we use them. This takes a lot coordination on everyone’s part including our sub contractors.” It’s the first thing Gentry mentions when asked about the project at 401 Healdsburg Ave., a 20,000 square foot, 2-story commercial building located at the corner of Healdsburg Ave. and North Street in Healdsburg, just off the Healdsburg downtown Square. Architect Chuck Peterson of Santa Rosa designed the building.

GCCI is a construction company that deals solely with commercial projects and GCCI is willing to travel. “We have worked in Vacaville, Tracy, Colorado, Florida, Mexico and the Yukon Territory,” states Gentry, suggesting that perhaps they will go anywhere to build. Originally GCCI concentrated on public works projects such as schools, “We have done work at Santa Rosa High School and at Montgomery we built the performing arts building and library. Now we do a lot of work in the private sector.”

Gentry sites a big difference between the two markets, “In the private sector you have building permits and the freedom to make changes and save money for the customer when it’s possible. In public works there are no permits and you have private inspectors hired by the district or architect to oversee construction. It’s not that one is better than the other, they are just completely different.”

Seismic retrofitting is another specialty of GCCI. “One of the biggest projects we did was an existing 12-story high rise building – Bay View Federal Savings, one million pounds of steel were used to reinforce that bank,” according to Gentry.

Back on ground at 401 Healdsburg Ave., an office building that will feature a 25 square foot indoor atrium topped with a skylight, things are on schedule. Gentry has one group of his favorite sub contractors on the job and LeDuc & Dexter’s commercial department is installing the entire plumbing system. “LeDuc & Dexter are fantastic. We’ve worked with them over the past 10 years. Their workmanship, their timing and their professionalism are all a reflection of their owners. It always starts at the top.”