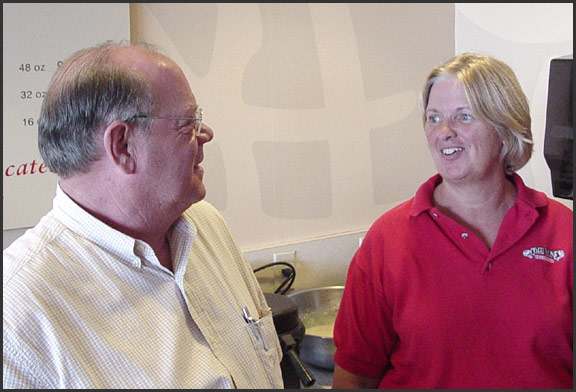 When recently asked if she was aspiring to become “the ice cream queen,” Trudy Grabenauer replied, “I’m trying!” So far she’s off to a good start. Grabenauer, who resides in Santa Rosa, owns and operates Cold Stone Creamery retail ice cream stores in Montgomery Village in Santa Rosa, Washington Square in East Petaluma and the Shiloh Shopping Center in Windsor. Grabenauer is working on the construction of the fourth Sonoma County store in Rohnert Park off Rohnert Park Expressway near Target and Pacific Theaters.

It all started a few years ago when Grabenauer was visiting her daughter at college and the two went out for ice cream. They went to a Cold Stone Creamery, the latest purveyor of luxury-priced, custom-mixed ice cream and one of the hottest new franchises in the United States. “I knew the minute I saw it, I wanted to bring it to Sonoma County,” Grabenauer said.

Billed as a 10-minute vacation, the Cold Stone concept goes like this: Use fresh ingredients to make ice cream. Blend that with mix-ins such as m&m candies or chopped berries on a chilled granite slab in front of the customer. Then scoop the creation into a waffle cone that was baked on site. There are over 800 Cold Stone Creamery franchise stores across all 50 states plus Puerto Rico, the Virgin Islands and Guam.

Sales have been good for Grabenauer’s three Sonoma County stores. One small problem has been finding a good plumbing contractor to work with in construction of the stores. “Let’s just call it poor customer service, not listening to the customer’s needs,” explains Grabenauer. “We started asking around and LeDuc & Dexter’s name came up from a number of people. They have a great reputation, people said they were the top of the line.”

Grabenauer sat down with LeDuc & Dexter’s commercial manager Bill Zeeb and commercial superintendent John Dunn to discuss the new construction of the Rohnert Park store and presented them with a list of plumbing do’s and don’ts based on her less than satisfactory experience with previous plumbers. After the meeting, Dunn posted the list back at the offices of LeDuc & Dexter.

LeDuc & Dexter have completed the under slab plumbing for the Rohnert Park store and the slab has been poured. When this store is completed Grabenauer has plans to open three more. Store number 5 will be near Sonoma State University, store number 6 will be at Mendocino and Steele Lane in the old Safeway location and store number 7 will be somewhere near the square in Healdsburg. It’s good to be “the ice cream queen”.