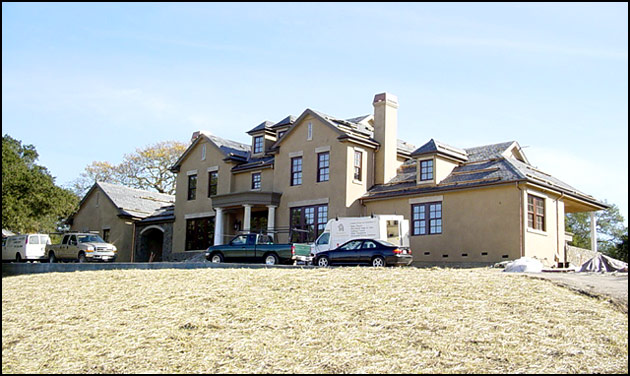 Since 1965, Total Concepts has been building one-of-a-kind custom homes. “We started off building homes at Sea Ranch, then we moved down the coast and built homes in Bodega Bay. Now most of our work is in Sonoma and Napa County,” says Brad Rechin, Project Manager for Total Concepts and part owner along with his father and two brothers. Hank Rechin, the father, who started with the coastal homes, taught and brought his sons into the business over the years. Brothers Brad and Mark supervise the building projects and John oversees contractual, bidding, administrative and negotiation duties.

Total Concepts has been involved in commercial projects in the winery sector, such as Viader Winery and Beckstoffer Vineyards, but for the most part hey have made their name and reputation building upscale custom homes. They recently completed the construction of one home and are currently building another home in the exclusive gated community of Shiloh Estates.

Architect Farrell Faber designed the 7,200 square foot Shiloh Estates home and guesthouse, which is now under construction. The project, which is nearing completion, will represent 14 months of work by the time it is done. The home features a multi-peaked black slate roof, a front stone faux archway and an all cherry wood spiral staircase. All of the doors and windows are imported from a French company, Portalais, which is owned by Total Concepts. The plumbing, which is being installed by LeDuc & Dexter’s residential department , consists of all copper piping and a number of stylish fixtures and sinks.

“We have worked with LeDuc & Dexter on 4 projects within the last year or so. Kevin (Delong) did a great job with the rough plumbing on this project. We had been working with a number of smaller plumbing contractors in the past and we decided that we needed a bigger company to handle our workload,” says Rechin.